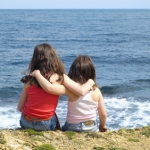 It is December 31, 2010, and the world is hovering between the old and the new. Our New Year’s Eve plans were cancelled at the last minute when the hostess was hit with a nasty case of the flu. So here we are at home waiting for the guitar to drop on Lower Broadway, and reminiscing about the highs and lows of the past three hundred and sixty five days. I won’t bore you with the details of the upheaval and trauma that our family experienced last year. You probably had your own, maybe more so.

Over time, bad memories soften and fade. But these past twelve months will probably live on as one of the best/worst years of my life. It was the best of times, it was the worst of times…it was the spring of hope, it was the winter of despair. Charles Dickens wrote those words in 1860 but he could have been describing my life in 2010. Unlike Great Expectations, however, it was the spring of despair that turned into the winter of hope. For that, I’m very grateful – not that the year is finally over, but more that it came at all, and even more thankful that when it came, there were friends offering a hand to pull me up, a shoulder to lean on, a listening ear, or a thoughtful word.

I’ve heard it said that the three most beautiful words in the English language are I love you. 2010 added two words of particular beauty and significance to my life story: Me too…

In sharing about his own recent spiritual journey, my pastor related the night when he finally mustered up the courage to share his deepest spiritual questions and struggles with his parents, and how into the very long pause that followed these somewhat shocking revelations came the quiet voice of his mother. “Me too,” she offered. He tells it more poignantly than I can, but my point is that her joining him in that place of uncomfortable uncertainty was far more affirming and supportive than any pat spiritual fix-it-all answer. She extended no quoting of a handy Scripture, no words of shock or shame, just an honest Me too.

If I had to point to just one thing this year that has been a lifeline between my dark night of the soul and a hopeful dawn, it would be the people who’ve said, “Me too”. For so long I felt alone, isolated and utterly incapable of putting into words some of the things I was thinking and feeling. I’ll never forget the relief that flooded over me when I heard someone that I respected say – out loud, in front of God and everybody – some of the exact things I’d been wondering about.

Me too moments are precious gifts to weary travelers who for many long miles have only seen a desolate landscape in their horizon without another person in sight. Me too moments are like a desert oasis – while they don’t make miles of hot burning endless sand magically evaporate, they do provide refreshment and relief and hope, and a renewed purpose and strength to press forward in the adventure of life.

Last week I got a small taste of what it feels like to give back that kind of hope. A friend had opened up about some gut wrenching God questions following her dad’s long drawn out and painful death. I don’t know why she felt it was safe to pour out her heart, and it really doesn’t matter. It’s nearly as irrelevant what I said (a lot, probably more than was necessary). What is important is what she heard, and that was, “I get it. You are not alone.” Which was just another way of saying, “Me too”.

It’s amazing when you realize that a great deal of the angst comes from feeling alone… in your thoughts… alone in your questions… isolated from the shallow thinkers in an ocean of your own fear. I’m amazed how many people are afraid… I mean… doesn’t it take more courage to admit you don’t know or that you don’t have answers? And then the strange paradox is that there’s is also a peace in owning that.

So along with a couple resolutions for the new year that include the requisite I will exercise more, eat less sugar and be a better wife/mother/daughter/sister/friend, I want to become a better listener – to become more tuned in to the people around me that need to hear “Me too.” I know what a difference it has made in my journey. It may have saved my life. In 2011 I want to give back that hope to others.

At the end of a string of emails with my friend, she marveled, “and to think all that time I thought I was the only one.” I know what she means. I thought so, too. But I wasn’t.

And you aren’t, either.

This entry was posted on Friday, December 31st, 2010 at 6:28 PM and tagged with answers, Barbara Wyer, dark night of the soul, God, great expectations, new years resolutions, questions, searching for God and posted in a journey towards God, Barbara Wyer blog. You can follow any responses to this entry through the RSS 2.0 feed.
« Welcoming Advent
Shut Up and Listen »